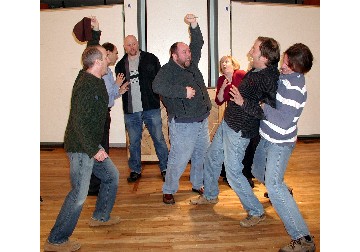 Coal Creek Community Theater of Louisville, CO presents the world premiere of “Shakespeare, Incorporated” by local playwright, Don Fried. “Shakespeare Incorporated,” directed by Lynn Fleming, will open February 26th and play through March 13th at the Louisville Center for the Arts.
At A Glance

WHAT
WORLD PREMIERE of “Shakespeare, Incorporated”
By Don Fried

WHERE
Louisville Center for the Arts
801 Grant Ave., Louisville, CO

SYNOPSIS
What happens when the current-day descendants of all the notables who were ever purported to be the “real” writers of Shakespeare’s plays gather for their annual, theatrical house party and uncover a manuscript that claims to offer the true account of how Shakespeare’s works were written? What happens is a wrinkle in time that takes the characters and the audience back to the Elizabethan Era and unfolds the events that led to the creation of the great works of The Bard. In attendance at the party are Mary Sydney, the hostess, and the descendants of Christopher Marlowe, Edward de Vere, William Stanley, Francis Bacon, Ben Jonson, and of course, the not-so-great William Shaksper (pronounced shack-spur) himself. Questions, revelations, and laughter abound in this whimsical, semi-historical exploration of one of literature’s favorite Conspiracy Theories. Shakespeare, Incorporated is an award winning play, written by local playwright, Don Fried, and celebrating its World Premiere on CCCT’s stage.

ABOUT CCCT
Coal Creek Community Theater is a 501(c)3, non-profit organization based in Louisville, CO. They are an all volunteer operation that is now in its 21st Season. CCCT is sponsored, in part, by the Scientific and Cultural Facilities District (SCFD) and the City of Louisville.