In celebration of Religious Harmony week, the Church of Scientology of Colorado’s Volunteer Ministers recently hosted a round table, “Building Bridges Across Boundaries.” The discussion revolved around the problem of the great need for dialogue among different faiths and religions to enhance mutual understand, harmony, and cooperation among people.

One of the best way to build bridges of understanding is to work together, and the group announced it would host its first monthly… Continue

Steve and Rich, long-time residents of Dallas, Texas, loved their dogs. All 5 of their dogs, ranging in age from 3 to 14 years old, were from rescues, shelters, or the streets of Dallas. Sadly and unexpectedly, however, Rich passed away, and then Steve passed away in December 2019. Their sudden and unexpected passing left their 5 dogs with no family, no home, and nowhere to go.

Amidst the sadness and tragedy, Rich’s brother, Dan, stepped in to try to find homes for all 5 dogs. He…

Philip Tobias, a Boulder technical and marketing communicator (www.philiptobias.com), is volunteering in 2020 as the Email Lists Manager for the Boulder Writers Alliance (www.bwa.org). BWA serves Boulder, Denver, and Longmont communicators and employers. THE PURRFECT INTRODUCTION TO OPERA, BOULDER OPERA’S FAMILY SHOW: PUSS IN BOOTS
Boulder Opera performs Puss in Boots (English and Spanish versions) in Boulder and Lafayette for ages 3 and up

Boulder/Lafayette, CO - This February 2020, Boulder Opera announces the revival and Colorado Premiere of the fairy
tale…

FORT COLLINS, Colo. (Oct. 23, 2019) – There are some things in life that everyone wants: health, happiness and the feeling of being included. Inclusion is more than just a popular buzzword in the HR industry; it is a business gap that once filled is proven to drive reputation, retention…

The Denver chapter of the Drug-Free World Foundation travelled for the second year to the Northern Colorado (NOCO) Emergency Preparedness and Family Safety Expo.  The Drug-Free World mission is to everyone—kids and adults—learn the truth about drug use and abuse so they can make the better choice and not take drugs.

The NOCO event is a joint effort between Larimer and Weld Counties and provides the public with a variety of public safety services, ranging from emergency preparedness… 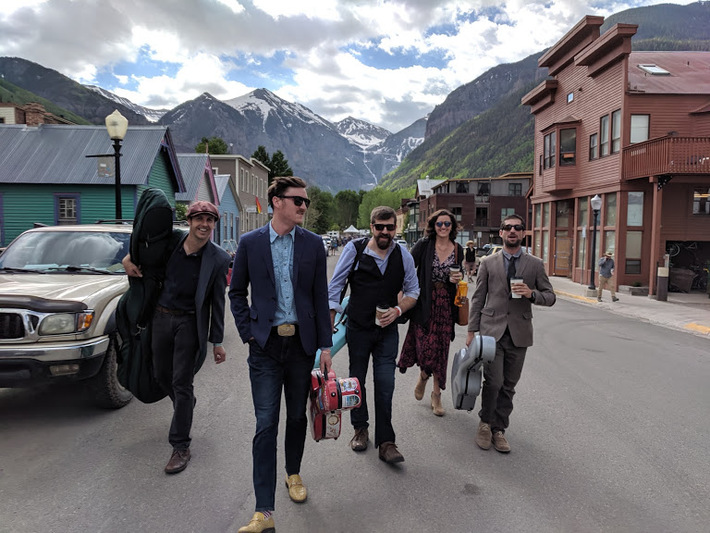 This past weekend, Boulder based bluegrass band Bowregard took first place in the Telluride Bluegrass Festival Band Contest. They were selected out of hundreds of interested…

My name is Mary, and I've lived in Longmont my whole life. I just returned to CO after my first year of school at Stanford. This year at Stanford, I joined a group called Mon Ami - a college student companionship service for seniors. As a companion, I would spend time with a lovely woman named Doris who lived in an assisted living facility. Although Doris had around-the-clock care, social engagement and quality 1 on 1 time usually fell through the cracks. So…

Fixing a Rock Chip: The Importance of Windshield Repair

Imagine you’re driving along your favorite country road when your unsuspecting windshield is assaulted by a stray pebble.  Your windshield is left with a pesky stone chip etched in its glass. This scenario is a common one, with an often-simple solution, windshield repair.  Depending on the type of damage and the extent of the damage incurred, windshield repair may be a cost saving solution to total repair.…

Charlie's Guys is organized exclusively for children 18 years and younger across the country who have lost a sibling in any way.  Our mission is to remind children who have lost a brother or a sister that they are loved and not forgotten. We aim to provide these individuals with something special - a new experience or a gift - that meets their needs/wants. We hope to provide them with lasting, positive memory to help them throughout their grief journey. …

Charlie's Guys - Anniversary of the One Year Launch

Leading up to our anniversary, we will feature stories from families affected by child and sibling loss. To participate, email us (charliesguys@gmail.com) your story along with a picture -OR- post your story and photo to your…

The summer of 2017 was idyllic. We had everything they could have dreamed of - a happy marriage, a beautiful home in Boulder, Colorado, two adorable sons ages 3.5 and almost 2, and a daughter on the way. We had spent most of the summer poolside in Boulder and beach-bound in Newport Beach, California and Hawaii. Our boys loved to play transformers, and Charlie, our youngest son, would point to airplanes and helicopters in the sky shouting, “the guys!” - an…

Flagstaff Academy recently had two teams compete at the regional Destination Imagination tournament which took place on March 2nd.  The second grade Rising Stars team "The Penguins" wrote and presented an original story complete with a pop-up book to a panel of judges. Whereas their division is non-competitive, they did a great job working collaboratively. The third grade team "The Gold Stars" competed in the Heads Up Improvisational division and placed second…
Continue

Golden, CO – The Alliance for the Development of Additive Processing Technologies (ADAPTSM), an industry-academia consortium that advances data informatics and advanced characterization technologies to Optimize for AdditiveSM, welcomes new member… BOULDER, CO | February 20, 2019 – Throughout March, Americans commemorate Women’s History Month by highlighting women’s vital contributions to our history, culture and society. Throughout the month, the Museum of Boulder will offer educational and engaging… Until recently, International Women’s Day has remained largely in the shadows as a somewhat obscure holiday only recognized in a handful of countries and celebrated in even less. WIth the current political climate, it is no wonder that it has skyrocketed in popularity and become increasingly celebrated both here and abroad.…

Denver, CO –The Colorado Manufacturing Awards (CMA), presented by CompanyWeek and Manufacturer’s Edge, has opened nominations for its 4th annual program, culminating in an awards reception and presentation…