Two hundred forty years ago General George Washington, the Commander in Chief of the Continental Army, took to the field with his troops and spent the next eight years engaging in a military campaign to secure freedom for our patriot ancestors and their posterity. He made some of his toughest decisions in his sleeping and office tent, what we like to refer to as the “First Oval Office.”

George Washington’s tent served as his field headquarters throughout the war.  Erin Jackson, the National President of the Children of the American Revolution 2015-2016 Project is to raise funds to support the preservation of our nation’s history and create a permanent home for this iconic treasure. It is an authentic witness to our founding history and traveled on the Road to Independence that led to the fulfillment of the dream for American independence and the expansion of liberty to future states.

"First Oval Office” will be permanent exhibit at the new Museum of the American Revolution.  The museum is now under construction in Philadelphia—the city that served as the headquarters to the Revolution. A dedicated theater will house the tent, dramatically bringing its story to life through state-of-the-art multimedia techniques. Scheduled to open in 2017, the museum is located just steps from Independence Hall and the Liberty Bell. Many places claim that George Washington spent the night, but how many people can say that they have saved, made a home for, and promoted education about the room where General George Washington spent the entire Revolutionary War?  We have the opportunity to preserve a Revolutionary War artifact for generations to come.  To learn more please visit www.amrevmuseum.org 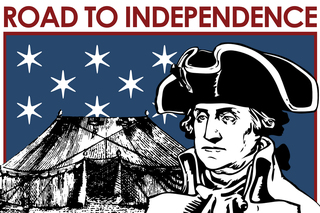