No Socks To Work Day 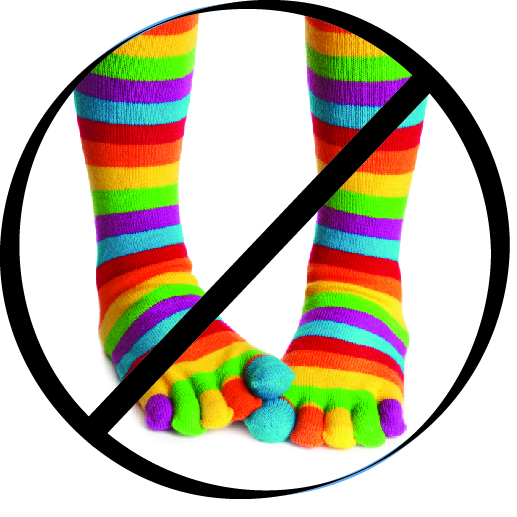 A citywide effort to gather donations of socks for Denver’s homeless population is kicking off with the inaugural “No Socks to Work Day” on Dec. 12, 2012.  “No Socks to Work Day” asks workers to forego their socks for the day, donate a new pair of socks in their place, and sport bare ankles in the workplace in show of support for the campaign. The drive will be in full effect through Dec. 31, 2012.

The Sock-it-to-Em Socks Campaign™ was launched in 2011 by Sue Lee, CEO of EQ Media and creator of “I Believe in Me!” When the entrepreneur recognized how many Americans face the harsh winter cold and dampness with inadequate protection for their feet, she asked her friend Phillis Shimamoto to join her in 2012 to form Sock-it-to-Em and began soliciting fellow small business owners and others to pitch in.

This year, Lee and Shimamoto teamed with Small Business Drives America™, a nationwide program to highlight the contributions of small businesses to the nation’s economy, in launching the “No-Socks-To-Work™” Day drive. Thousands of businesses and other workplaces nationwide are expected to shed their socks and participate.

Denver’s homeless population is now twice what it was just a year ago.  The Sock-it-to-‘em Sock Campaign™ aims to cover the feet of as many of those in need as possible before the new year. No Socks to Work Day was the brainchild of Denver resident, Dean Rotbart, co-coordinator of the sock donation drive, and the force behind the Small Business Drives Colorado™ campaign.

“We want to launch the effort in Denver, but intend to encourage other cities around the country to join in,” said Sue Lee, Sock-it-to-‘em founder.  “Denver is a good place to start because of the growing homeless population who will have to endure bone-chilling temperatures during the holidays.  By encouraging the community to donate new and used socks to those in need, we hope to help everyone survive the cold.”

“It’s estimated that one out of every four homeless individuals in Denver is a child – that’s just heartbreaking,” said Dean Rotbart.  “If we can make sure their feet are warm for the holidays, we will be doing something to help.”

The grassroots campaign has attracted the attention and support of several Denver-metro area sponsors, including:

Sock donations can be dropped off at any of these locations:

Sock donations can also be mailed to:

Everyone who plans to participate on December 12th can take the “No-Socks-To-Work™” pledge on Twitter @NoSocksToWork.  See www.Twitter.com/nosockstowork.  Please tweet the following:  "I'm going sockless to work on 12/12/12 to support No-Socks-To-Work™ Day. I'll donate a pair of new socks to the homeless. #nosockstowork

Participants are also encouraged to connect with No Socks to Work on Facebook and post images of sockless employees: https://www.facebook.com/NoSocksToWorkDay

Additional information can be found at www.NoSocksToWork.org.  Businesses interested in becoming a sponsor or participating in “No-Socks-To-Work™” Day, may contact Rotbart at nosockstowork@gmail.com, or by phone at 303-296-1200.