Fleets in Colorado Fueling Up with recycOil Biodiesel 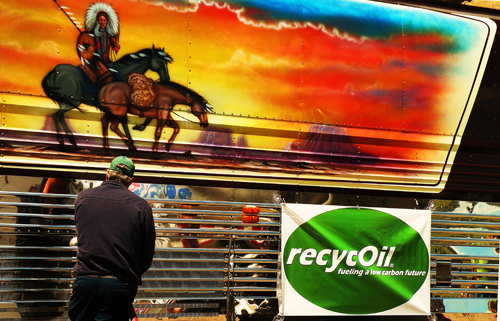 recycOil (http://www.recycoil.com) has been recycling used cooking oil in the Rocky Mountain region since 2005 – and has been supplying commercial biodiesel producers and other agricultural and industrial end-users with high quality feedstock for almost six years. Now, in partnership with best-in-class biodiesel producers and fuel distributors, recycOil is providing high-quality, cost- competitive biodiesel fuel to the Colorado market. This fuel is manufactured from used cooking oil and other recycled feedstocks under the strictest quality production protocols—achieving the highest environmental performance available in today’s commercial marketplace and delivering high-performance fuel at cost effective price points. All of this is done while also adhering 100% to applicable local, state and federal rules and regulations, including the federal Renewable Fuel Standard.

“We are proud to be fueling a low carbon future through our used cooking-oil recycling programs and sustainable biodiesel solutions,” said recycOil spokesperson Zane Kessler. “It is an honor for our company to be partnering with some of the nation’s premier biodiesel producers to convert existing waste streams into low carbon, competitively-priced biodiesel for Colorado consumers.”

Now other sustainability leaders are getting on board too! On June 20th, the recycOil team, along with commercial biodiesel producer, Renewable Energy Group, and biofuels distributor, Gray Oil Inc., “put the fat” in New Belgium Brewery’s Tour de Fat 2011 tour kick-off by fuelling them up with biodiesel. Then on June 21st, the same partners fueled up Willie Nelson’s Country Throwdown tour at Red Rocks amphitheatre, where recycOil has been recycling Front Range music fans’ fryer grease since 2008. Nelson continues to practice what he preaches about the clean, domestic, job creating advantages of biodiesel as he fuels his tour vehicles with the environmentally friendly fuel.  Stay tuned through the summer and into the fall to hear more about how recycOil is helping to close the loop with domestic energy resources!

"It is a terrific honor to fuel up Willie Nelson's tour as he is an artist that has fueled up country music fans across the USA," said Aaron W. Perry, CEO of recycOil. "His support of farmers and the biodiesel industry are testament to his commitment to rural communities and the production of sustainable, American-made biofuels."

Hundreds of restaurants and commercial facilities throughout Colorado and the Rocky Mountain region are working with recycOil to drive innovation in the Clean Technology industry – helping to strengthen our local economies while reducing our dependence on foreign oil, improving air quality and deploying commercially viable alternatives. This is how the recycOil network is helping fuel a low carbon future.