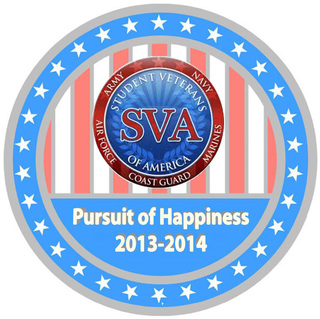 Quoted from the National Program Packet, We hold these truths to be self evident, that all men are created equal, that they are endowed by their creator with certain unalienable Rights, that among these are Life, Liberty and the Pursuit of Happiness.” Our nation’s founding document states that all citizens are entitled to the pursuit of happiness. Today, an education often allows us to further our opportunities, creating our own happy ending. The pursuit of higher education is not always an easy task, especially for veterans returning home from serving our country.

The 2013-2014 National Project will raise funds for the Student Veterans of America. This non-profit organization supports veterans who are returning to complete their college degree.

Veterans have always banned together. After the creation of the G.I. Bill after World War II, veterans were returning in large numbers to their higher education dreams. After September 11th occurred 12 years ago, veterans were returning home to limited funds from the G.I. Bill. It was not as easy for them to ban together to complete their degrees. Student Veterans of America provides these men and women a group of other veterans to support them throughout their college careers.

Members of the armed forces are returning home to a more competitive work environment and economy. The last few years have seen a surplus of skilled professionals in the workplace with college degrees due to the economic decline. Young men and women, who made the choice to serve their country before fulfilling their college careers, find themselves competing against others of their age who have completed their degrees and are vying for limited professional positions. For these returning warriors, a college degree is a necessary tool for meeting their professional goals. Student Veterans of America strives to turn these aspirations into a reality, supporting these veterans and their families throughout the experience.

Student Veterans of America provides military veterans with the resources, support and advocacy needed to succeed in higher education and following graduation.” There are over 750 chapters that are officially recognized as student groups on college campuses around the country. In addition to creating chapters, the organization helps the veterans by building student centers at their colleges, and providing childcare for the returning veterans families. In the newly built student centers, student veterans have access to everything they may need in order for them to succeed both academically and personally. SVA provides job counseling and more to help the entire family. Leadership is another important aspect of the organization. It is important that our military men and women understand how they can transfer their experiences from serving in the armed forces into their professional everyday lives. SVA works hard to make sure that our nation’s heroes get the assistance they need by creating a more comfortable environment for them when they return to their schooling dreams. With the aid of SVA on college campuses, graduation rates among veterans have risen.