Students from CU's College of Architecture give back to the community on Saturday at North Port Apartments. North Port is a public housing complex, managed by Boulder Housing Partners. Residents are elderly or people with disabilities who qualify for low income housing assistance and rely on community resources and individuals to supplement and enrich their lives. About 10 Architecture students will be donating their time to paint interior hallways and the community room while fulfilling a… Continue

It is time to warm up your vocal cords for this smashing competition, the winner and runners up will receive miniature guitars!

See you there young idols. 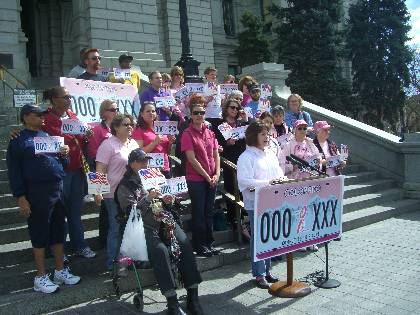 Breast cancer survivors and advocates gathered March 15 at the State Capitol to show their support for the Committed to the Cure Breast Cancer license plate bill, which ensures that funds from the sale of breast cancer license plates will actually go to breast cancer treatment and prevention. House Bill 1164 is making its way through the House. Rep. Dianne Primavera brought this legislation for two reasons. First, to ensure funds raised from the plate… Continue I had the pleasure of being joined at the Capitol March 25 by Cassie Goevert-Reynolds, a student at Kohl Elementary School in Broomfield. Cassie is an outstanding young lady, and she was chosen to lead the House of Representatives in reciting the pledge of allegiance. Great job Cassie!

Fireside Production is going dark for Earth Hour. Check out the Fireside Feature we produced on Earth Hour '08... https://www.youtube.com/watch?v=LUCI442jPig&feature=channel_page. Then, make a difference and go dark tonight!

A Grande Finale Patisserie has opened a second location making it even easier for you to enjoy our decadent Desserts!

Along with our extended hours, you can now enjoy wine and microbrews while indulging at our Lafayette location.

Hey all, just wanted to let you know that I've received a suspicious "comment" on my page from a "Timmi Schmidt" a very personable greeting soliciting "free ringtones". Wouldn't it be nice if solicitors could just stay the heck out of every aspect of life. What a bunch of vultures.

Get free Easter Sheet Music THE EASTER EGG HUNT, at FunSheetMusic.com This site has some wonderful music for piano students. The Sheet Music includes Audio so students can hear it played as well as a sing-along audio. The lyrics are wonderful. Be patient the high quality print files take just a minute to download. HAPPY SPRING!

Fireside Production is unveiling its new Facebook page. Please become a fan and stay up-to-date on Fireside projects and video blogs. We also invite you to share your thoughts or start discussions on just about anything that's on your mind...
http://www.facebook.com/profile.php?id=1365636911#/pages/Denver-CO/Fireside-Production/70433508409?ref=ts

As the economic crisis puts a spotlight on the obscure world of credit default swaps (CDS), an unregulated $62 trillion market that most people never heard of and even fewer understood, the fear of a CDS catastrophe is haunting the country’s largest banks, and the nation’s healthy community institutions and consumers are paying the price.
An analysis of FDIC data as of 12/2008 conducted by BancVue… Continue

The Mountains Edge Fitness Center is celebrating our 10 year anniversary in April. We will have fun events throughout the entire month of April. We will have Cake and goodies on our actual anniversary on April 1st, but we will have a BBQ celebrating the event on April 16th from 530-830pm. We will also be hosting a "Meet the Personal Trainers" event on the 18th from 10-1pm. We will offer complimentary consultations during on the 18th. Everyone is invited! Please come by and help us celebrate 10… Continue

With the economy and investment opportunities slimming, consumers are looking for alternative, safe avenues for storing their money other than their mattress. CheckingFinder.com, home to the highest yielding free checking accounts at community banks and credit unions across the nation, has announced a limited time offer of a trial membership to Dave Ramsey's MyTotalMoneyMakeover.com for every person who submits an application.

In addition to the advice and tools from Dave Ramsey, a… Continue

Review of The Triplettes of Belville sent by audience member

Thank you for an absolutely wonderful show: Dance Etoile’s Triplets of Belleville was one of the most entertaining and unique ballets I have seen. Bravo! That my family was moved to tears, laughter and to the edge of our seats in such a short period of time is testament to your unique ability as a choreographer director and performing artist. Please extend my compliments to your fantastic troupe!

Thanks for spending your Fridays in March with Nite at the Rec, we had so much fun with our Magician Rob and his pets Leo, Ben and Jerry. We also gave St. Patty some love last week by wearing green.

Join us this Friday for some March Madness, wear your team's gear and come ready to play in our basketball tournament for free Nite at the Rec passes.

Mr. Shope will assume the role of Executive Vice President, Sales and Marketing, for First Western Financial, Inc., where he will be responsible for overseeing the firm’s expanding sales and service infrastructure as well as managing the Bank’s marketing efforts. He was most… Continue

I am looking for Parents and little students for its French, Mandarin, Spanish, German, Tibetan, Hebrew, Italian, Japanese, Hungarian, Russian and English as a Second Language full immersion language courses with native teachers.

Chicken Little, the Curbside Prophet meet at a national summit

So what would happen if Chicken Little and a couple of sandwich board prophets attended a G8 Summit or something like it?

Imagine the conversation if the world's greatest minds got together, and the discussion included "I told you! Why didn't your listen?" from the two socially least likely to have a clue about national and global finance issues.
It's intersting that now we have governors turning away the stimulus offering, congressmen talking about an additional stimulus… Continue

Danse Etoile Ballet presents The Triplettes of Belville and 3 world- premiere pieces with live music May 9 at 2pm at the Broomfield Auditorium.

Dancers Rebekah Arth, Rebecca Walker and Kammie Deuschle and musician/composer John Heins join the lively Danse Etoile Ballet company for a performance of live music and dance with something for everyone. The show will open with the classical Pas des Odalisques from Le Corsaire ballet, Two solos from The Flames of Paris, followed by 3 world-premiere contemporary pieces The Black Eagle set on music by French singer Barbara, La Valse d’Amelie and A Place to be Together. The second act will be the… Continue