Congratulations to the following athletes for qualifying performances at the USATF Region X Junior Olympics in Phoenix, Arizona on July 12-13.

These athletes now advance to the National Junior Olympics in Omaha, Nebraska July 23-27.

ok, so I have started (or have I) an online parents group. I hope that people will join. I have invited quite a few. I want this area to be a safe space, without judgement, or anger. I don't know how well this will work out but hopefully it will go well.

SmileLogic, Inc., an independent dental hygiene practice owned by Deb Spence, R.D.H, has expanded and moved into a new, larger office at 403 Summit Blvd., Suite 202, in Broomfield near the corner of Coalton Rd. and Summit Blvd. Dental hygiene services are provided in a shot-free, needle-free, and drill-free environment and include: teeth cleaning, periodontal therapy, preventive maintenance services, x-rays and fluoride if needed, teeth whitening at an affordable price, an oral evaluation and… Continue

Burritos To Go teams up with the "Cancer Crushers" for the Relay For Life. “Cancer Crushers” win first place with most money raised! Hello, again, folks,
I am a professional landscape contractor specializing in "Xeriscape" installations / remodels.
( DoveGardens.com ) I do this because it's well past time for us to fix the things needed to make room for the next generations of Boulderites, Denverites, residents of Ft. Collins, and beyond. Conserving water by remodeling residential or commercial property landscape to be more efficient with water use is not a wrong thing to… Continue 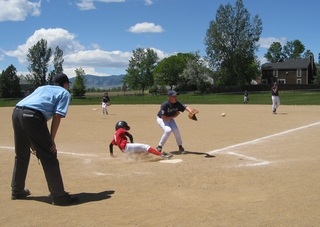 Today, the Phillies played the Mariners in a Monarch Little League matchup at Cleo West field in Louisville. The game started out close and remained that way for the duration of play - a perfect match. At the end of it all, the Mariners came out the winners by only 2 runs.


It was a fun game for both sides, and both teams played great defense and offense. Interestingly, the umpires cracked down a lot more than usual on players leaving to steal a base before the… Continue

Ugly Fish: Fresh from the EcoMarket

Finding kids clothes that are both stylish and sustainably made is next to impossible. Sure a few organic lines have popped up to provide organic clothes and pjs for newborns, but what about toddlers and up? The creators at Ugly Fish experienced the same dilemma and a new generation of clothing was born. Ugly Fish clothes are neither ugly nor fish-like, but similar to their Angler Fish icon, they are highly evolved!Highly evolved you say? Well, perhaps clever is a better descriptor. The clever… Continue

Volunteer host families are needed to host a group of international exchange students this summer in Boulder County. The students will participate in a language and cultural enrichment program that will better enable them to live in the United States for the academic year.A total of 25 students will arrive to Boulder in mid July, and stay through mid August with host families in Boulder as part of the Language and Cultural Enrichment Program, an aspect of the ASSE International Student Exchange… Continue

"Fiddler on the Roof" is going into it's final three performances.
It is a bitter sweet time for the cast and crew. They are excited for it to be over and yet they will miss the fun and socialness of being part of a community production.
Fiddler gets to be a part of Longmont's first Artwalk of the season. Just a reminder to those with tickets for the Friday night performance, come early to find parking, main street will be closed off.
Thank you to all the volunteers who make… Continue 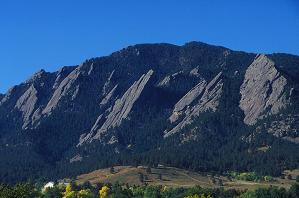 SoboTalk is a brand-new online discussion community for South Boulder people and topics. We launched on April 21 and are growing fast, and we welcome all past, present and furture South Boulderites to join us here. SoboTalk is a resource for everything from babysitter recos to construction news, garage sale announcements and information-sharing of all kinds. Join us, and tell your neighbors! If… Continue

SoboTalk is a brand-new online discussion community for South Boulder people and topics. We launched on April 21 and are growing fast, and we welcome all past, present and furture South Boulderites to join us here. SoboTalk is a resource for everything from babysitter recos to construction news, garage sale announcements and information-sharing of all kinds. Join us, and tell your neighbors! If… Continue

Mark Simpson, CU golf coach for almost 30 years, passed away from lung cancer two years ago. Mark went to HealthLinks Clinic during his cancer and his wife Valorie is working closely with HLC to put on the 1st Annual 2008 Mark Simpson Golf Tournament. Cancer survivor, Teddi Dingae is the inspiration and sponsor of the tournament.
WHEN: Sat., May 31
WHERE: Coal Creek Golf Course in Louisville
Proceeds go to HealthLinks Foundation to provide financial support, education and… Continue

As part of the ritual of welcoming spring, I always like to clean my closets, which I mean both literally and figuratively. There is nothing like the cathartic feeling of emptying the clutter and dust bunnies from your life that have accumulated over the past couple of seasons (or God forbid, years). Now I do realize that life does not always present us with the opportunities or incentives accomplish this task on a spiritual level. It is undoubtedly much easier for us to spot the accumulation… Continue

From John F. Kennedy to Sitting Bull to Marie Curie, the Sacred Heart of Jesus Catholic School 3rd grade students took on new identities and hosted the second annual wax museum on Friday, April 25th. Mrs. Angela Cunningham and Mrs. Amy Edward's third grade classes have been studying historical events, inventions and people that have changed the world for the better. They believe social studies can not simply be read about; it must be experienced in order to allow each child to gain a deeper… Continue

Fiddler on the Roof-a tradition that families can enjoy year after year. Longmont Theatre is once again producing this magical show. LTC first performed Fiddler in 1981 as the first production in the new building at 513 Main St. What a treat to get to see if recreated in the 50th Anniversary Season of LTC.
There are even a few cast members tha have returned to the stage for this performance. Of course they were child actors then, but now have filled adult roles such as Yente and the… Continue

I signed up for the Erie Citizen's Police Academy

The Town of Erie is getting ready to start their 8th year of the Citizen's Police Academy. Beginning March 7th, 2008 and running approximately 10 weeks, the class will meet weekly on Friday nights between 7:00pm and 10:00pmInfo at Town of Erie's WebsiteI signed up this year. The first session is this Friday, March 7th. I am going to share some of my experiences here on this blog..... stay tuned.